In Support of Israel 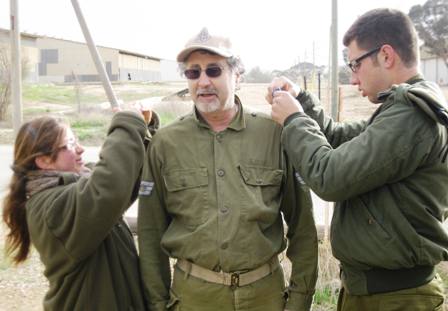 When rockets were raining down last November, many people wanted to do something tangible to support Israel. I, for one, wanted to do more than go to a rally or write a letter to the editor. After expressing my frustration to my daughter, who lives in Jerusalem, she suggested I look into Sar-El. I did, and on January 2 I headed to Israel for three weeks of volunteering on a military base. It has been a remarkable trip that I will always cherish.

First, a little about Sar-El. In 1982, during the war in the Galil, mobilized soldiers from the north were unavailable to harvest the crops. They faced the devastating possibility of losing all they had worked to produce. To avoid this tragedy, former head of the IDF Paratroopers, Dr. Aharon Davidi (z”l), sent emissaries to the United States seeking volunteers to help with the harvest. And, with the commitment of 650 volunteers, the crops were saved and Sar-El was born.

Today, an international collection of people of all ages and religions regularly trek to Israel to continue this volunteer effort. Sar-El is now part of the Logistics Division of the IDF and is staffed by soldiers, madrichim and madrichot, who guide their civilian charges throughout their

stay. There are many different assignments for Sar-El volunteers. My desire was to get down and dirty, shlepping, sorting or cleaning; doing anything that would contribute to Israel’s ability to defend itself. I got my wish. I and ten others were assigned to a base in the south. Our job was to re-pack kit-bags (duffle bags) that had been supplied to mobilized reservists during operation Amud Ha’naan (Pillar of Defense) and returned after the mission.

Although we began as strangers, our group established an immediate esprit de corp, as we kibbitized and laughed our way through a challenging first week. We efficiently transformed a collection of merchandise into fully restored kit-bags much to the joy and amazement of Shuki, a retired solider supervising our work. It was really something to see people work who are really motivated. No job was too small or too big, and when someone finished one job they immediately started helping someone else.

The first week was challenging primarily because of the weather: driving rain, almost hurricane force winds, penetrating cold and plenty of mud. These conditions were especially difficult for three of us whose quarters lacked any heat. Of course the rain was welcome, for, in that week alone, the Kinneret rose some 60 centimeters. (24 inches). Another reason the weather made things difficult stemmed from the fact that we had to walk outside to our one shower and single-seat commode. But we did not sign up for luxury, we were there to work, and when we were working, the conditions were irrelevant.

We ate our meals in the base mess hall. Whereas breakfast and dinner were Spartan–eggs, some veggies, pudding and maybe pasta– lunch was glorious. They served several different types of fresh vegetables, seasoned and cooked or grilled to perfection, thick hearty soups, and various forms of cooked or grilled meat that was delicious and plentiful. I was especially happy to have fried schnitzel, my favorite food, three times during my stay. It was moist and delicious. One day I ate seven pieces, five at the table and one in each hand as I returned to work. Members of our group who had kitchen duty those days were very proud of all the schnitzels they had dipped and battered.

In the evenings, our Madricha, Adina, had activities for us covering everything from a couple of “Getting to Know You” sessions, to games about Israeli history and culture, to a primer on the various divisions of the IDF, each with its distinctive colored beret. Adina even gave us a brief Hebrew lesson stocked with useful words and phrases.

Adina is an amazing young Israeli soldier. Her job is to inform us, translate for us, take care of our needs to the extent possible and tell us where to be and when. She did so much more. Adina taught us, “commanded” us, in a gentle way and won our respect and admiration even though all but two of our group are much older than she is. And she does it all with a wonderful sense of humor and lots of genuine affection.

It is comforting to see many young, well-trained soldiers at meals and around the base. It also was great to speak with many of them, especially Gal, who hails from Ashkelon and Tamir who grew up in Sderot. Both told me how the rockets affected their communities and how people, especially children, are fairing. Tamir and his younger siblings have grown up with sirens providing a 30 second warning that Hamas rockets are on the way. He wants to settle in Sderot, and lauds the city’s beauty and vitality, but admits that it is particularly hard on the children to live under such pressure. Gal explained that although it is traumatic when the siren first sounds, life returns to normal quickly when the all clear is sounded. He was also inspired by how people helped each other during the crises.

Tamir guarded us on our daylong trip, and was armed with a rifle produced in Hartford. When I explained that it was actually manufactured in West Hartford, near my home, he was most impressed. I asked him why, in addition to the semi-automatic and burst settings, he could not fire fully automatic. His explanation impressed upon me the difference between the humanity of the IDF and the evil of its enemies. Tamir told me that full automatic fire is “dangerous. It could kill innocent civilians.” This kid is 20 years old and already he knows that civilians are not the enemy, and, by his tone, this precept is very important to him.

There are also some subtle things that make it so clear that there is a huge difference between a Jewish and non-Jewish army preparing for war. One of the most endearing is a sign adorning a shelf in a warehouse that is dedicated solely to medical supplies.

Medical stations are provided with certain rations to comfort and help rejuvenate injured troops. One ration is a carton of Ossem wafers. The sign in front, however, advised those pulling supplies that the wafers are “CHOMETZ! ASSURA LI’PESACH,” (CHOMETZ! FORBIDDEN ON PASSOVER). As Shuki explained, if the supplies are distributed on Passover, the Ossem wafers stay on the shelf.

One really neat aspect of the Sar-El experience is wearing fatigues on the base. We were required to do so when working. On the second day, just after flag raising, we were also presented with our Sar-El insignias. They were buttoned into place by our madrichim. A tradition accompanying this event is a ceremonial punch in the shoulder that the madrichim administer to both arms. They relished the opportunity.

Because one gets fatigues, there is little need to bring a lot of clothing. The Sar-El website, however, contains a detailed list of recommended items that are more similar to packing for camping trip than a normal Israeli vacation. I tried to follow the list literally and was happy I did because I used everything from the extra tissues to cold-medicine to clothespins. I also brought toe warmers and hand cream that made life a little more bearable. One item not on the list but of inestimable value was gel pads for my shoes. I have little trouble staying on my feet when moving around, but when I have to stand still, I sometimes have problems. The gel support eliminated this concern quite effectively.

Sar-El may not be for everyone. The conditions were often rugged and the work was grueling, at times filthy, sometimes monotonous but always, always wonderful. As long as I was busy, any inconveniences such as the dust and dirt were simply part of the white noise of life. Moreover, now that I know of Sar-El and have lived it, I plan to return as often as possible. I also know that if another “situation” arises, I can go to Israel and be useful rather than sit home and wring my hands.