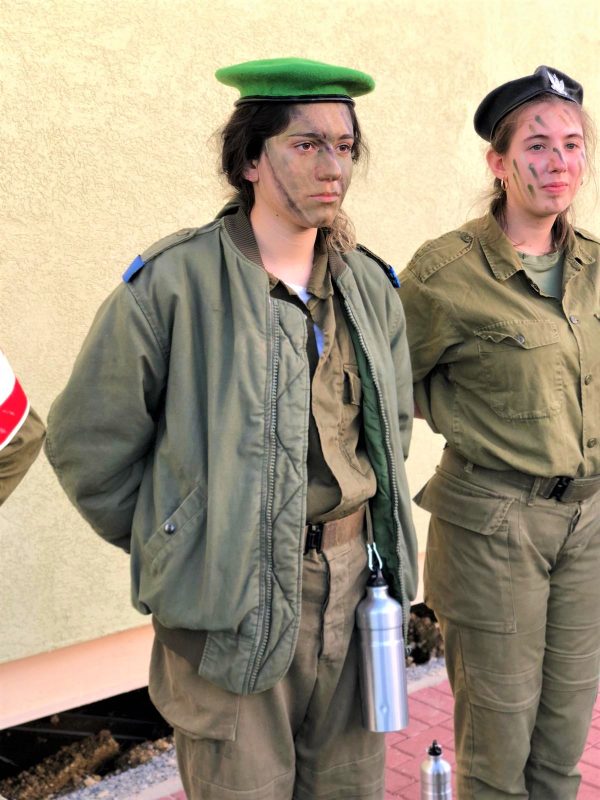 Our bucket list adventure started with an idea of volunteering for  Tzahal, the Israeli Defense Force (IDF),  which welcomes Jewish and non-Jewish volunteers from all over the globe, with no age restrictions. The IDF lets them do various non-combat jobs, like peeling potatoes, packing first aid kits, sweeping floors, filling containers with petrol, sorting out medical supplies and the like.

The program has been going for many years. I decided to be a hero and enlisted, together with my long-suffering loyal wife.

We came to the meeting place in the middle of Tel Aviv, bustling, brush and busy metropolis of almost a million people, and  that is where our jaws dropped. Instead of a small group of 10-15 people, which we had expected, I saw a sizeable crowd chatting away, greeting friends from the previous years, introducing newbies and what not.

What makes these well-lived people from all walks of life  forgo the well-earned creature comforts of home and come to an austere, minimalist conditions of the army camp and work for the foreign army, getting no pay, being admittedly well-fed and being led by several young girls to boot, who are fit to be their grand-daughters?

The situation seems surreal. This is, hands down, one of the most unusual life’s situations I found myself in. However, you cannot find a bunch of nicer or more considerate people under the same roof, even if, like Socrates, you’ll look for them with the candle in your hand in a daylight.

In a meantime – off to work we go. Those, who imagine a cavernous underground storage, guarded by the  menacing sentries, snarling dogs and  sophisticated security, filled with different kinds of weaponry to overflowing will be disappointed. None of this, thank you very much, for the motley crew of Norwegian housewives, business people and clerics, Boston cardiographers, North Carolina farmers and Alaskan feisty nurses, Melbourne retirees, Canadian bikers, South African pensioners, Hungarian workers and an Indian accountant. All of us are volunteers.

Cavernous this storage might be, but weapons are nowhere in sight. We are packing medical kits, putting dressings, bandages, morphine ampules with and without the syringes and what not, into the numbered pouches of a shoulder bags, made of a mixture of oilskin and vinyl.  Really, it is a mini-emergency department and the logic, pragmatism and the convenience of this carry-on ambulance is quite impressive. Gradually, the tempo is increasing. Our team leader, fittingly called Moshiach (Messiah in Hebrew), starts to bring stacks of boxes on his fork lift. Boxes look like ammo containers but they are full to the brim with variety of emergency medical supplies instead. The boxes look like they have just been rescued from the capture by the enemy in a battle and, seemingly, still smell of cordite. This smell is strangely exciting and the men from the country, which gave the world vikings, respond to it by moving faster, more purposefully, as though the battle is looming. This is infectious. Very soon entire team is frantic. To observe a group of grandparents running around, carrying medications, dripping with sweat, gulping down water and flopping into chairs in utter exhaustion – why it has to be hilarious! However, this Dad’s Army is dead set serious and puts a heart and a soul into what they are doing. I think, Moshiach is a bit taken aback by the strength of a communal emotion he unleashed, so he decided to let us all go earlier and calm the situation down a bit.

Our group is situated somewhere around Tel Aviv, we are not exactly sure where. The base, we are told, is huge and chaotic and volunteers are discouraged to move around, so as not to give the security a headache. Uniforms notwithstanding, our group looks distinctly non-military, especially the footwear, which is our own.  We look like a bunch of grand-parental fuddy-daddies playing soldiers.  We dismiss the faint ridiculousness of our appearance with the shrug and carry on our assigned duties, including scrubbing the toilets and the communal floors with diligence and dignity. There is an economy dimension to volunteering, as well as a spiritual one. According to our leaders, there are about five thousand volunteers coming to Israel yearly at their own cost. They do jobs, which need to be done but require manpower and resources the Israeli Government finds difficult to allocate. Jobs like storage, transportation, renovation, maintenance, gardening, food preparation, cleaning, even waste disposal. Instead of hiring, outsourcing or using soldiers, Israeli Army uses volunteers at the minimal cost – food and lodgings.

We are led by a group of four girl soldiers. They try to be serious and, when occasion demands – could be, but they are so young that each one of them could well be a granddaughter to most of  our group members. These girls giggle, dance and laugh with or without a reason. They are approachable and enthusiastic. They are a kind and a homely face of the lean and mean fighting machine, which the IDF is.

The food in a mess hall is kosher – several kinds of salads  on the stands in the middle of a huge room, milk and meat products are not served together but on a separate distribution points and there is no dessert, only fresh fruit.  We eat exactly the same food as the other Israelis do, be they soldiers or civilian employees.  The food includes grilled chicken, chevapchichies (sort of  skinless sausages) or stews, vegetarian patties, beef-stakes and hamburgers, boiled eggs and grilled veggies.In short – the food is good. It is simple, wholesome, tasty and filling.

People who work at the base long ago got used to the bunch of elderly warriors, strolling around in sneakers, speaking no Hebrew. Many, in turn, speak no English and this gives raise to hilarious situations. Every morning we go to  warehouse manager, who supervises the sorting out of different batches of a surgical tape but does not know how to explain what he needs. His bearded face becomes red, he screams louder, sincerely not understanding why these stupid foreigners can’t understand simple Hebrew.  He submits to inevitable and fetches his boss, who speaks English. They start to scream at each other and, at first, I thought that they will come to blows, so intense and heated their exchange is. Then the boss, who is younger, comes close to the screaming man, gives him a hug, kisses him in the cheek and explains the job to us. Then he adds an explanation – ‘he(the screamer) cannot hear, he is deaf. So, he screams’.  We nod our heads in unison, pretending that we believe him.  He, in turn pretends that he believes that we believe him and, everyone’s face saved, all of us get on with today’s job. This performance gets repeated every morning and we came to expect it with cheerful anticipation. The actors in the drama are so expressive and believable that they can sell tickets to watch it.

The time has come to say good bye. These three weeks were gone in a blink of an eye and brought with them feeling of a meaningful work, good fellowship and the sense of unity and  purpose, seldom experienced in everyday life to such a degree.

We are standing at the upper level of the Tel Aviv train station, trying to bring two heavy suitcases down stairs, having a miserable time of it – the stairs are high and the elevator is switched off for the maintenance. Suddenly, someone gets hold of a suitcase handle, and, while talking to me takes it down without looking back. I have no idea what is going on but immediately assume that my belongings are in danger of being separated from me. At the bottom of the stairs, the young man, who took my suitcase stops, leaves the suitcase and runs after the train departing from the platform, jumping into a still semi-open door. He has a time to waive and smile at me and then he disappears. I hear the startled voice of my wife and see the same picture – some young fellow takes her suitcase down in exactly the same fashion.  We did not even ask for help – these youngsters saw two pensioners struggling with the heavy staff and helped. Thanks guys, this help was very much appreciated.

These images of Israel will stay with me for a long time – smiling girl-soldiers, 18-20 year-olds in the Army uniform carrying their weapons on the streets and busses, dancing in the City of Jerusalem, direct dialogue with Almighty at The Wall, hand-squeezed pomegranate juice at the Carmel market, and Israeli eternal hope and zest for life.