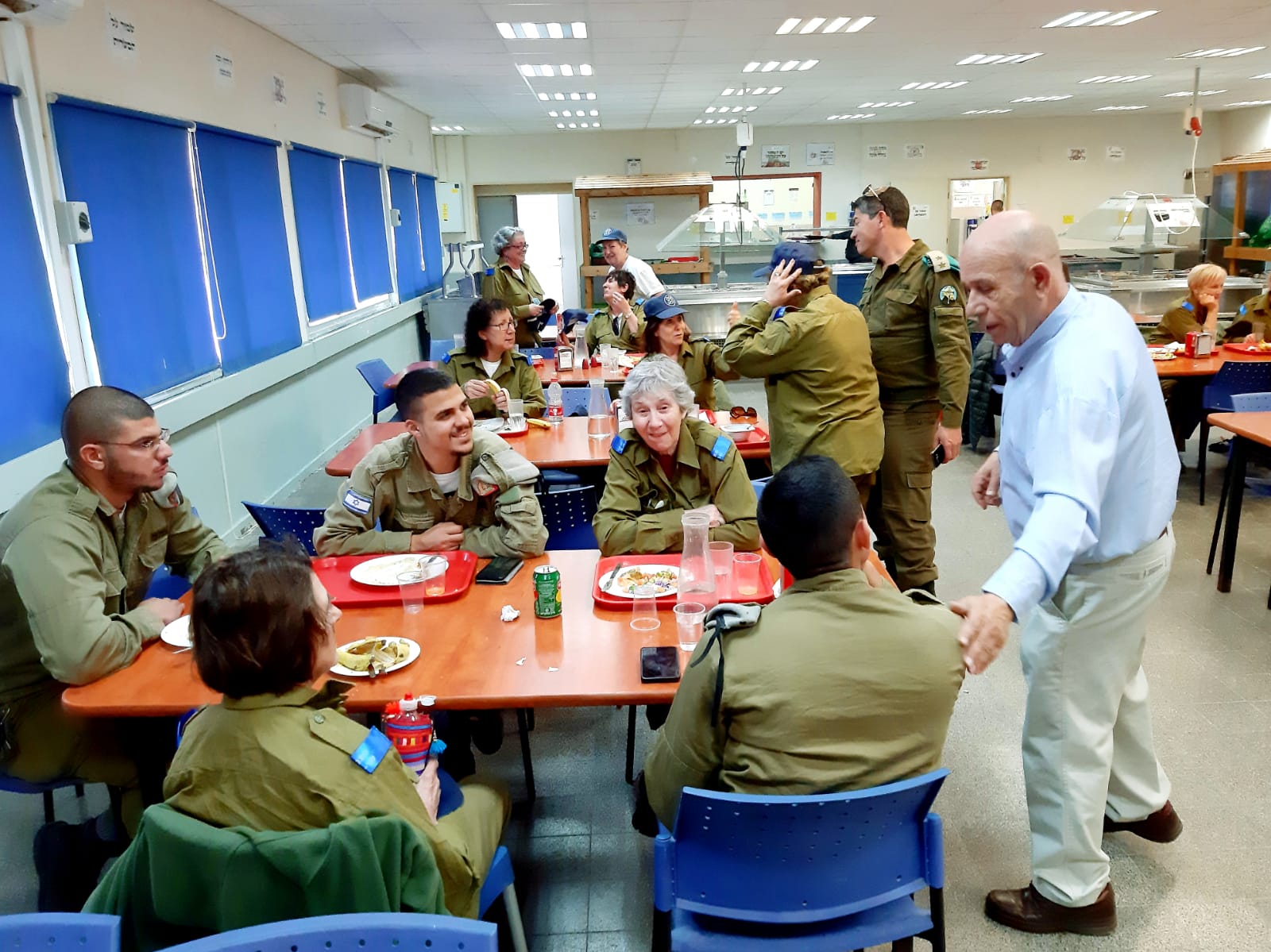 The bunk beds in which we slept (four to a room) were narrow and hard. The army issue sleeping blanket warm enough in the cold desert night. No hot water for two days. Army food included lots of humus, fresh tomatoes and cucumbers, some omelettes,  and most days hot dogs for lunch.  At dairy meals we had three kinds of  cheese and “leben”—the tasty, sugarless Israeli yogurt. Why leave the comforts of home in the USA for this modest fare? For me the answer was simple: because after the last war (during which Israel was hit with over 1500 bombs and its people cowered in bomb shelters day after day), I could not let my hands stand idle.

As one in a group of 14 “Volunteers for Israel,” I was assigned to a paratroopers’ reservist base. Last month, this IDF (Israeli Defense Forces) base had provided training and supplies for 800 of the 70,000 troops called up in the Gaza war. Now, the uniforms and duffel bags that had been used by the reservists had to be cleaned and re-packed for the next national emergency. Everyone I spoke with is convinced that Israel will face, alas, another threat. Our job was to help with logistics for the next war.

Each day, I reported for work in a warehouse overseen by a female officer, the mother of two young children.  We, the American volunteers worked alongside young soldiers (mostly girls who were 19 years old) and male reservists in their late 20s–all sent to this base to help out with the massive task of repairing and resupplying the paratroopers’ tanks, jeeps and field uniforms.  The mixture of backgrounds and races on our team was astonishing: Russian, Yemenite, Ethiopian, Moroccan and American. We worked side by side using a mélange of tongues that included French and Spanish along with English and Hebrew.

The job of my group was simple and essential: First, we had to sort uniforms according to size. Next, we checked small backpacks for helmet, fork, knife, spoon, canteens, hat, and belt. We had to replace missing items. Checking the ammo vest for size and dead bullets was done one day with the help of  teenagers with Down syndrome bussed in once a week. They glowed in their green fatigues and the importance of their task.  More experienced soldiers checked the size of each parka to make sure it matched the uniform size. Checking magazines for 5 inserts and holster was done by Chris, a non-Jewish cabinet-maker from San Francisco. (Weapons are handed out to reservists only in the field during active duty exercises.)

The last step was to stuff all these supplies and a plastic tarp into a duffle bag. I helped with each task. Since I am fluent in Hebrew and turned out to be the oldest and the most “administratively experienced”  I was put in charge of the final checking. I was asked to sign my Jewish name –Tzivia—on each finished bag. In the next war, some of Israel’s soldiers will grab a bag  that I had supervised.  This was a huge and humbling responsibility—beyond what I had imagined when I set off for this service trip. Yet here at the base, it all made sense. I gladly breathed in the dust and swept the floor to get rid of strings, tags and mouse droppings at the end of the workday. In a miniscule way I was making a difference.

I was also privileged to witness the peace-loving values of hardened soldiers. Each day at 1pm I attended services in the army chapel, heard the Torah readings and witnessed officers and draftees pray together fervently for “Shalom”—that deeply Jewish longing and commitment which is, alas, unmatched by most other nations surrounding Israel today.

One morning, after the usual flag raising ceremony attended by all volunteers and all soldiers, our group leader was giving us the daily news. This day, she began: “Iran blames Israel…” As a joke, I chimed in: “for the murders in Connecticut.” It turned out not to be a joke at all. Iran had indeed accused Israel of masterminding the Newton killing of children “to retaliate against USA’s passivity during the UN vote on Palestine.” I realized suddenly that the magnitude and madness of such lies cannot be countered by facts or reason. Instead, I had to use my two hands and aching back to help Israel survive.  This knowledge was enough to carry me though two weeks of gritty volunteering for the only democracy in the Middle East.