Below are the first two items in our series about Sar-Elniks who made Aliyah. Please send us your Aliyah story !

As we write this brief note, we reflect on what it means to us to be both Olim Chadashim (new immigrants) and Sar-Elniks. In hindsight, some of the things we feel are cliché. 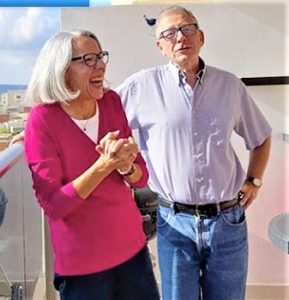 Shelley and I both retired in the summer of 2013 and made aliya the following December. We sold our home in Queens, NY, said goodbye to our families and friends and moved to a small city in northern Israel. Being retired and moving to Israel gave us the opportunity to re-invent ourselves and start our lives over again without the commitments and obligations of raising a family and pursuing careers.

My first Sar El experience was in 2005 and Shelley joined me two years later after she recovered from hip replacement surgery. We have both been Sar El volunteers each year since, more or less.

Our first six months in Israel were spent attending ulpan, an intensive Hebrew language program. We had classes five days a week for five hours a day. We had homework that took us 2-3 hours every evening. Ulpan was all consuming and exhausting. When we completed our ulpan program, we wanted to reward ourselves so the first thing we did was volunteer for two weeks with Sar El.

When you live in Israel, you are always aware of the security situation. Though we feel safer here in Israel than we did in New York, the news reports are constant and we have Red Alert apps on our telephones. Now, our connection and volunteering with Sar El takes on more meaning and is more personal.

Most Israelis serve in the IDF and everyone here has family or friends or the children of friends currently serving. Participating in Sar El gives us a personal connection to the people we know and live with. We see soldiers on the streets, in restaurants, on the busses and on the trains every day. We identify which branch of service the soldier is in from their berets and their units from their shoulder patches.

As Sar El volunteers living in Israel, we actively participate in the defense of our country just as these young people do. We can look our friends in the eye when we speak of the dangers facing our sons and daughters because when we volunteer with Sar El, we are physically with the soldiers.

In May, Shelley and I were at a base just outside the Gaza fence. This was the same week that the U.S. Embassy opened in Jerusalem and there were major confrontations at the border fence. We were on a large combat base with many soldiers about, while many more were deployed at the fence. Tensions were so high that week, helmets and flak jackets were issued to the volunteers. Nothing happened and we were perfectly safe. The equipment was issued just as a precaution.

Living in Israel is exciting and interesting. There are many, many places to visit and to learn about our heritage. It is a country that is on the cutting edge of technology and also living in the past.

We are living the dream; we are home, at last.