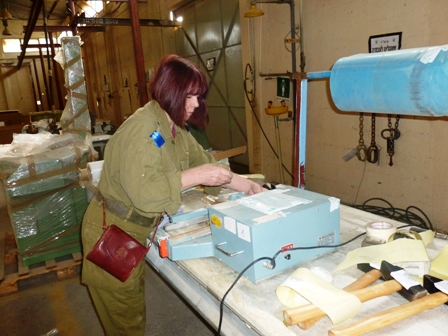 Operation Pillar of Defence was the historical backdrop to my third Sar-El programme.  Up in the hills of the Galilee, near Afula, I spent my first week on a massive armaments and heavy artillery base for reservists.  Something was about to happen, was the general feeling amongst my fellow Sar-elniks.  We didn’t know what of course: there was simply a sense of unease.

Tumbleweed blew across the highway as our bus navigated a sand storm on the road to Beer Sheva.  Our next destination was a large logistics base where I had been posted last year.

On the first afternoon I was there the air raid siren wailed.  I was working with Jennie Goldstone, who many of us remember from Sinai Synagogue, in one of the warehouses; we looked at each other and wondered if it was a training exercise, but the explosion that followed spoke otherwise.  The rocket thankfully landed on open ground.  After that everyone was given safety instructions: if in billets, stay put.  Our tiny madricha, Adi, assured us that we were in no danger.  “I believe you,” I said.

That night we were ushered to a safe area when the siren sounded: no windows, you see.  Hearing it sent an eerie feeling that shuddered through my body.  Both soldiers and volunteers felt the tension pervading the tiny space in which we were crammed.  I felt shivery and close to tears; I’m not certain why I felt emotional: I wasn’t afraid.  Perhaps it was the collective sense of something threatening us, and the frightened faces of the youngsters. Some of the girls phoned their parents in Beer Sheva to find out if they were safe, or received calls.  One girl fainted and was revived by Jennie.  Another loud explosion that was either Iron Dome intercepting the Grad missile, or a direct hit on  Beer Sheva.  It turned out to be the latter.  Property was damaged this time but no civilian injuries, thank God.  This was the first time the effect on Israelis of missile fire was brought home to me.

Two days later, the Israelis targeted Ahmed Jabari, a military commander of Hamas, in Gaza.  During the evening, the siren went again, followed by yet another explosion, ‘boom gadol’ as the Israelis say.  As we were sheltering in the safe area near the dining room, a young soldier came up to me smiling, and said:  “Don’t worry.  We will protect you.” Smiling back, I thanked him.  We had 60 seconds to get to the safe area.

We were told to sleep in our clothes that night as the missiles flew over at regular intervals, not just one at a time, but several together.  I became accustomed to hearing them intercepted or falling on open ground. I knew I was safe.  But for those who have to live with the threat of injuries, death or damage to their homes on an almost daily basis, the reality is far from safe or secure.  I also knew that I would be going home, to live in peace that was taken for granted.  Eventually, in the early hours, I managed to get some sleep.

The Sar-El coordinator on the base told us that he was worried that ground troops would be sent into Gaza, as his son would be one of them: the political becoming personal again.

Three more missile attacks during breakfast the following morning before Jabari’s funeral took place in Gaza.  We were evacuated to Tel Aviv-Yafo while it was taking place and no more raids were launched. At Kiryat Malachi, we learned that three people had been killed by a direct hit as they stood on a balcony.  We were told that we would not be returning to Beer Sheva.

That evening, sitting in the dining room of the army hostel in Jaffa, Beit Oded, imagine my shock as the siren wailed and everyone was sent to the safe room and told to sit on the floor, away from the one tall window.  A Fajr missile was on its way and this time was not intercepted but fell in the sea near the port.  After the explosion was heard, we were told to stay put for 15 minutes and given instruction of what to do in the street if the siren was heard, i.e. lie face down covering our heads. This was Thursday evening.

On Erev Shabbat, the streets of Jaffa and Tel Aviv were almost deserted after another missile attack, which was reported by the BBC anchorman across the street from the hostel.  Four of us decided to go out for a meal, and it was true, empty streets and restaurants were short of customers; in fact we were the only diners in a small falafel restaurant near  by.  After we had eaten, the proprietor closed shop.

On Saturday morning I walked into the Old City [of Jaffa] with Shirley and Maia, both fellow Sar-Elniks.  It was a beautiful morning with families enjoying walks near the port, street musicians playing jazz, and an Ethiopian Orthodox wedding party being photographed before the event.  Shirley remarked that no one would think there was a war going on as Israelis just got on with their daily lives.  Walking back near the canons I noticed two outside broadcast units setting up equipment with a clear view of the beachfront of Tel Aviv.  I walked up to a young man and asked him, “What are you filming?”  “Nothing,” he replied. “Why would you want to film ‘nothing’?” I persisted. He simply shrugged and gave a wry smile.

Towards the end of Shabbat I decided to take a stroll by the sea.  Rain began to fall so I started to walk back to Beit Oded, then the siren wailed as I crossed a main road.  Cars screeched to a halt with their occupants running towards a low wall.  One group leaped over the wall; the other crouched in front of it. It made no difference which side as far as protection went. I joined the latter.  We all peered at the sky to witness the interception of a long range Fajr missile.  A man in the group filmed it on his cell phone, and then the ‘boom’ following several seconds after the explosion.   We got up smiled at each other and went our separate ways.  I’m afraid I defied orders to lie on the ground and cover my head.

Watching the BBC news channel that evening I saw the presenter standing where the unit had been that morning.  The interception was captured, plus a brief shot of some people crouching by a wall.  Maybe it was a coincidence that the crew had set up at that spot, or maybe not.

So, my next posting was a gigantic medical base near Tel Aviv.  Consignments of medical supplies were going down south to the Gaza border day and night. We discovered that medical supplies were also being sent into Gaza, to Palestinian hospitals, until one shipment was attacked by rocket fire.  Jennie and I worked in a warehouse, testing and packing equipment such as suction pumps. All day long the foreman had his small TV on, keeping abreast of the news.  One evening, we heard a siren from the TV: he told us that it was Tel Aviv, happening now.  A minute or so later the siren was heard on the base, so off we ran to the nearest safe area:  the men’s shirutim (toilet block).   That was the last time a missile was sent to Tel Aviv.

The same evening it was reported that a family of 11 had been killed in Gaza.  No one in my company rejoiced at this tragedy.  I took myself off for a solitary walk to reflect on the ghastliness of civilian casualties, on both sides.  Later that evening I heard the voice of a young American girl talking on her cell phone: “If they don’t kill, there’s no point in their existence.”  This, I later learned, was a reference to Hamas.

A ceasefire was agreed a few days later, but was broken almost immediately by Hamas.  This information was ‘buried’ in order to give the Egyptians credit for brokering it.  Politics yet again.

This Sar-El has been an extraordinary experience for me, from meeting, and working with, some American youngsters evacuated from Ashdod, (in Israel for a year teaching English), to sharing the actual reality of a war situation with so many dedicated, diverse adults of all ages and nationalities.

One evening, to distract ourselves from the tension of waiting for another missile attack, someone screened Fiddler on the Roof on the communal TV on the base.  That made many of us laugh, and cry.